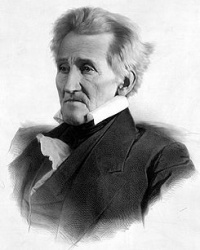 When the American congress voted to renew the charter of The Second Bank of The United States, President Andrew Jackson (1767-1845) responded by using his veto vote to prevent the renewal bill from passing. His response gives us an interesting insight.

“It is not our own citizens only who are to receive the bounty of our government. More than eight millions of the stock of this bank are held by foreigners… is there no danger to our liberty and independence in a bank that in its nature has so little to bind it to our country?… Controlling our currency, receiving our public moneys, and holding thousands of our citizens in dependence… would be more formidable and dangerous than a military power of the enemy. If government would confine itself to equal protection, and, as Heaven does its rains, shower its favour alike on the high and the low, the rich and the poor, it would be an unqualified blessing. In the act before me there seems to be a wide and unnecessary departure from these just principles.”
Andrew Jackson, Veto of the Bank Bill, to the Senate, (1832)

In 1832, Jackson ordered the withdrawal of government deposits from the Second Bank of the United States and instead had them put into safe banks.

The Second Bank of the United States’ head, Nicholas Biddle was quite candid about the power and intention of the bank when he openly threatened to cause a depression if the bank was not re-chartered, we quote.

“Nothing but widespread suffering will produce any effect on Congress… Our only safety is in pursuing a steady course of firm restriction – and I have no doubt that such a course will ultimately lead to restoration of the currency and the re-charter of the bank.”
Nicholas Biddle 1836

By calling in existing loans and refusing to issue new loans, the Bank did cause a massive depression.

However, in 1836, when the charter ran out, the Second Bank ceased to function.

It was then Andrew Jackson made these two famous statements:

When asked what he felt was the greatest achievement of his career Andrew Jackson replied without hesitation:

“I killed the bank!”

However, you will see this was not the end of private financial influence passing itself off as official when we look at ABRAHAM LINCOLN and THE CIVIL WAR (1861 – 1865).