Napoleon is suspicious of Bankers 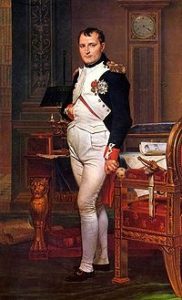 “When a government is dependent upon bankers for money, they and not the leaders of the government control the situation, since the hand that gives is above the hand that takes… Money has no motherland; financiers are without patriotism and without decency; their sole object is gain.”
Napoleon Bonaparte, 1815

For both sides of a war to be loaned money from the same privately owned Central Bank is not unusual. Nothing generates debt like war.

A Nation will borrow any amount to win. So naturally if the loser is kept going to the last straw in a vain hope of winning, then the more resources will be used up by the winning side before their victory is obtained more resources used, more loans taken out, more money made by the bankers; and even more amazing, the loans are usually given on condition that the victor pays the debts left by the loser.

In 1803, instead of borrowing from the bank, Napoleon sold territory west of the Mississippi to the 3rd President of the United States, Thomas Jefferson for 3 million dollars in gold; a deal known as the Louisiana Purchase.

Three million dollars richer, Napoleon quickly gathered together an army and set about conquering much of Europe.

Each place he went to, Napoleon found his opposition being financed by the Bank of England. All the while, the Bank of England was making huge profits as Prussia, Austria and finally Russia all went heavily into debt trying to stop him.

Four years later, with the main French army in Russia, Nathan Rothschild took charge of a bold plan to smuggle a shipment of gold through France to finance an attack from Spain by the Duke of Wellington.

Wellington’s attack from the south and other defeats eventually forced Napoleon into exile. However in 1815 he escaped from his banishment in Elba, an Island off the coast of Italy, and returned to Paris.

By March of that year Napoleon had equipped an army with the help of borrowed money from the Eubard Banking House of Paris.

With 74,000 French troops led by Napoleon, sizing up to meet 67,000 British and other European Troops 200 miles NE of Paris on June 18th 1815, it was a difficult one to call. Back in London, the real potential winner, Nathan Rothschild, was poised to strike in a bold plan to take control of the British stock market, the bond market, and possibly even the Bank of England.

Nathan, knowing that information is power, stationed his trusted agent named Rothworth near the battle field.

As soon as the battle was over Rothworth quickly returned to London, delivering the news to Rothschild 24 hours ahead of Wellington’s courier.

A victory by Napoleon would have devastated Britain’s financial system. Nathan stationed himself in his usual place next to an ancient pillar in the stock market.

This powerful man was not without observers as he hung his head, and began openly to sell huge numbers of British Government Bonds.

Reading this to mean that Napoleon must have won, everyone started to sell their British Bonds as well.

The bottom fell out of the market until you couldn’t hardly give them away. Meanwhile Rothschild began to secretly buy up all the hugely devalued bonds at a fraction of what they were worth a few hours before.

In this way Nathan Rothschild captured more in one afternoon than the combined forces of Napoleon and Wellington had captured in their entire lifetime.

The 19th century became known as the age of the Rothschild’s.  It has been estimated that they controlled half of the world’s wealth.

While their wealth continues to increase today, they have managed to blend into the background, giving an impression that their power has waned.

They only apply the Rothschild name to a small fraction of the companies they actually control.

Some authors claim that the Rothschild’s had not only taken over the Bank of England but they had also, in 1816, backed a new privately owned Central Bank in America called The Second Bank of The United States. This caused huge problems to the American president, Andrew Jackson (1828 – 1836).