Even though Andrew Jackson had killed off the Central Bank, fractional reserve banking moved like a virus through numerous state chartered banks instead. Fractional Banking continues to cause instability… and it thrives. Greed drives it on. When people lose their homes someone else wins them for a fraction of their worth. Depression is good news to the lender; but war causes even more debt and dependency than anything else.

Therefore, if the money changers couldn’t have their Central Bank with a license to print money, a war it would have to be. 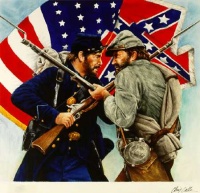 We can see from this quote of the then chancellor of Germany that slavery was not the only cause for the American Civil War:

“The division of the United States into federations of equal force was decided long before the Civil War by the high financial powers of Europe. These bankers were afraid that the US, if they remained as one block, and as one nation, would attain economic and financial independence, which would upset their financial domination over the world.”
Otto von Bismark chancellor of Germany (1876)

Predictably Lincoln, needing money to finance his war effort, went with his secretary of the treasury to New York to apply for the necessary loans. The money changers wishing the Union to fail offered loans at 24% to 36%. Lincoln declined the offer.

An old friend of Lincoln’s, Colonel Dick Taylor of Chicago was put in charge of solving the problem of how to finance the war. His solution is recorded as this:

“Just get Congress to pass a bill authorising the printing of full legal tender treasury notes… and pay your soldiers with them and go ahead and win your war with them also.”
Colonel Dick Taylor 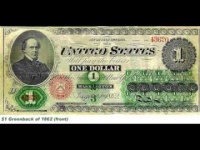 When Lincoln asked if the people of America would accept the notes Taylor said:

“The people or anyone else will not have any choice in the matter, if you make them full legal tender. They will have the full sanction of the government and be just as good as any money; as Congress is given that express right by the Constitution.”
Colonel Dick Taylor – Lincoln By Emil Ludwig 1930, containing a letter from Lincoln, also reprinted in Glory to God and the Sucker Democracy A Manuscript Collection of the Letters of Charles H. Lanphier compiled by Charles C. Patton.

Lincoln agreed to try this solution and printed 450 million dollars worth of the new bills using green ink on the back to distinguish them from other notes.

“The government should create, issue and circulate all the currency and credit needed to satisfy the spending power of the government and the buying power of consumers….. The privilege of creating and issuing money is not only the supreme prerogative of Government, but it is the Government’s greatest creative opportunity. By the adoption of these principles, the long-felt want for a uniform medium will be satisfied. The taxpayers will be saved immense sums of interest, discounts and exchanges. The financing of all public enterprises, the maintenance of stable government and ordered progress, and the conduct of the Treasury will become matters of practical administration. The people can and will be furnished with a currency as safe as their own government. Money will cease to be the master and become the servant of humanity. Democracy will rise superior to the money power.”
Abraham Lincoln. Senate document 23, Page 91. 1865.

From this we see that the solution worked so well Lincoln was seriously considering adopting this emergency measure as a permanent policy.

This would have been great for everyone except the money changers who quickly realised how dangerous this policy would be for them. They wasted no time in expressing their view in the London Times. Oddly enough, while the article seems to have been designed to discourage this creative financial policy, in its put down we’re clearly able to see the policies goodness.

“If this mischievous financial policy, which has its origin in North America, shall become endurated down to a fixture, then that Government will furnish its own money without cost. It will pay off debts and be without debt. It will have all the money necessary to carry on its commerce. It will become prosperous without precedent in the history of the world. The brains, and wealth of all countries will go to North America. That country must be destroyed or it will destroy every monarchy on the globe.”
Hazard Circular – London Times 1865

From this extract its plan to see that it is the advantage provided by the adopting of this policy which poses a threat to those not using it.

The money changers waited for their opportunity. Then in 1863, Lincoln needed just a bit more money to win the war. Seeing him in this vulnerable state, and knowing that the president could not get the congressional authority to issue more greenbacks, the money changers proposed the passing of the National Bank Act.

The act went through.

From this point on the entire US money supply would be created out of debt by bankers buying US government bonds and issuing them from reserves for bank notes.

The greenbacks continued to be in circulation until 1994, their numbers were not increased but in fact decreased.

“In numerous years following the war, the Federal Government ran a heavy surplus. It could not (however) pay off its debt, retire its securities, because to do so meant there would be no bonds to back the national bank notes. To pay off the debt was to destroy the money supply.”
John Kenneth Galbrath

The American economy has been based on government debt since 1864 and it is locked into this system.

Talk of paying off the debt without first reforming the banking system is just talk and a complete impossibility.

That same year Lincoln had a pleasant surprise.

The Tsar of Russia, Alexander II, was well aware of the money changers scam. The Tsar was refusing to allow them to set up a central bank in Russia. If Lincoln could limit the power of the money changers and win the war, the bankers would not be able to split America and hand it back to Britain and France as planned.

The Tsar knew that this handing back of a split America would come at a cost. Who would pay? The Tsar knew it would come by attacking Russia, it now being clearly in the money changers sights.

Therefore, the Tsar declared that if France or Britain gave help to the South, Russia would consider this an act of war. So Britain and France would instead wait in vain to have the wealth of the colonies returned to them. And, while they waited, Lincoln won the civil war.

With an election coming up the next year, Lincoln himself would wait for renewed public support before reversing the National Bank Act he had been pressured into approving during the war.

Sure. The money changers were pressing for a gold standard. Gold was scarce and easier to have a monopoly over. Much of this was already waiting in their hands and each gold merchant was well aware that what they really had could be easily made to seem like much, much more.

And the threat of Silver would only widen the field and lower the share, so they pressed for  THE RETURN OF THE GOLD STANDARD.