The way is opened to the Federal Reserve 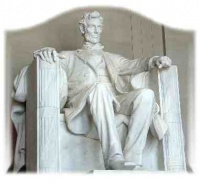 In Washington, the statue of Lincoln sits in his chair and looks out toward a building called the Federal Reserve Headquarters. Interestingly, this institution would not be there if Lincoln’s monetary policy had been adopted by the USA.

The Federal Reserve is not Federal and it has doubtful reserves. The name is an open deception designed to give this private bank the appearance that it is operating in the public’s interest, when in fact it is run solely to gain private profit for its select stockholders.

How it came into being was one of the shrewdest moves in financial history.

On 23rd December, 1913, the House of Representatives had passed the Federal Reserve Act, but it was still having difficulty getting it out of the Senate. Most members of Congress had gone home for the holidays, but unfortunately, the Senate had not declared Adjournment Sene Die (without day). They were therefore technically still in session. There were just three members still present. On a unanimous consent voice vote the 1913 Federal Reserve Act was passed. No objection was made. There was no one there to object.

Charles Lindbergh would have objected:

“The financial system has been turned over to… the federal reserve board. That board administers the finance system by authority of… a purely profiteering group. The system is private, conducted for the sole purpose of obtaining the greatest possible profits from the use of other peoples money.”Rep Charles A, Lindbergh (R-MN)

Louis T. McFadden would have objected.

“We have in this country one of the most corrupt institutions the world has ever known. I refer to the Federal Reserve Board… This evil institution has impoverished… the people of the United States… and has practically bankrupted our Government. It has done this through… the corrupt practice of the moneyed vultures who control it.”
Rep. Louis T, McFadden (R-PA)

Barry Goldwater would also have objected.

“Most Americans have no real understanding of the operation of the international money lenders… The accounts of the Federal Reserve System have never been audited. It operates outside the control of Congress and… manipulates the credit of the United States.”
Sen. Barry Goldwater (R-AZ)

The three people who passed the Federal Reserve Act in 1913, knew exactly what they were doing when they set up this private bank, modelled on the Bank of England. The fact that The Bank of England had been operating independently unopposed since 1694 must have given them a great deal of confidence.

So there it was, the newly formed Federal Reserve poised to produce any money the U.S. Government might need. All from thin air and with each dollar standing to make a healthy interest.

Nine days after its formation the Federal Reserve founders were wishing each other a Happy New Year.