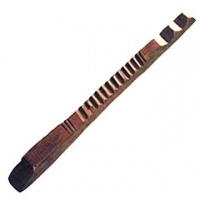 King Henry VIII, King of England, produced sticks of polished wood, with notches cut along one edge to signify the denominations. The stick was then split full length so each piece still had a record of the notches.

The King kept one half for proof against counterfeiting, and then spent the other half into the market place where it would continue to circulate as money.

Because only Tally Sticks were accepted by Henry for payment of taxes, there was a built in demand for them, which gave people confidence to accept these as money.

He could have used anything really, so long as the people agreed it had value, and his willingness to accept these sticks as legal tender made it easy for the people to agree. Herein lies a key: Money is only as valuable as people’s faith in it. Without that faith even today’s money is just paper (or polymer here in Australia).

The tally stick system worked really well for 726 years. It was the most successful form of currency in recent history and the British Empire was actually built under the Tally Stick system, and yet most of us are not aware of its existence?

In 1694 the Bank of England at its formation attacked the Tally Stick System.  They realised it was money outside the power of the money changers, (the very thing King Henry had intended).

What better way to eliminate the vital faith people had in this rival currency than to pretend it simply never existed and not discuss it. That seems to be what happened when the first shareholder’s in the Bank of England bought their original shares with notched pieces of wood and then retired the system. You heard correctly, they bought shares. The Bank of England was set up as a privately owned bank through investors buying shares. Shareholders expect a return on investment. Their driver is the return and not what is best for the people the Bank says it serves.

These investors, who’s names were kept secret, were meant to invest one and a quarter million pounds, but only three quarters of a million was received when it was chartered in 1694.

It then began to lend out many times more than it had in reserve, collecting interest on the lot.

This is not something you could just impose on people without preparation. The money changers needed to created the climate to make the formation of this private concern seem acceptable.

And here is how they did it.

With King Henry VIII relaxing the Usury Laws in the 1500’s, the money changers flooded the market with their gold and silver coins becoming richer by the minute.

The English Revolution of 1642 was financed by the money changers backing Oliver Cromwell’s successful attempt to purge the parliament and kill King Charles. What followed was 50 years of costly wars. Costly to those fighting them and profitable to those financing them.

So profitable that it allowed the money changers to take over a square mile of property still known as the City of London, which remains one of the three main financial centres in the world today.

The 50 years of war left England in financial ruin. The government officials went begging for loans from guess who, and the deal proposed resulted in a government sanctioned, privately owned bank which could produce money from nothing, essentially legally counterfeiting a national currency for private gain.

Now the politicians had a source from which to borrow all the money they wanted to borrow, and the debt created was secured against public taxes.

You would think someone would have seen through this, and realised they could produce their own money and owe no interest, but instead the Bank of England has been used as a model and now nearly every nation has a Central Bank with fractional reserve banking at its core.

These central banks have the power to take over a nations economy and become that nations real governing force. What we have here is a scam of mammoth proportions covering what is actually a hidden tax, being collected by private concerns.

The country sells bonds to the bank in return for money it cannot raise in taxes. The bonds are paid for by money produced from thin air. The government pays interest on the money it borrowed by borrowing more money in the same way. There is no way this debt can ever be paid, it has and will continue to increase.

If the government did find a way to pay off the debt, the result would be that there would be no bonds to back the currency, so to pay the debt would be to kill the currency.

With its formation the Bank of England soon flooded Britain with money. With no quality control and no insistence on value for money, prices doubled with money being thrown in every direction.

One company was even offering to drain the Red Sea to find Egyptian gold lost when the sea closed in on their pursuit of Moses.

As hard as it might be to believe, in times of economic upheaval, wealth is rarely destroyed and instead is often only transferred. And who benefits the most when money is scarce? You may have guessed. It’s those controlling what everyone else wants… it is the money changer’s.

Even today the Bank of England expresses its determination to prevent the ups and downs of booms and depressions, yet there have been nothing but ups and downs since its formation with the British pound rarely being stable.

One thing however has been stable since 1743 and that is the growing fortune of the ROTHSCHILDS.

So who or what are the Rothschilds?