It is an invasion… the enemy is at the gate! 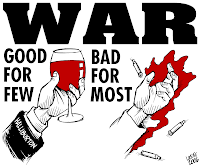 Men have fought throughout history for a myriad of reasons. It has been motivated by greed, desire for power, religious beliefs, or just plain stupidity and pride.

For some men they have been thrust into battle to defend an unwanted attack on their lands, loved ones or way of life.

There was a time we knew exactly who our enemy was. They lined up on the battlefield, faced each other and warred over their differences. The spoils went to the victor.

But the art of war has changed.

The same old strategies can not, and do not, work forever. For example, we saw how the Romans used adapted strategy to conquer. They took the best strategies and technologies from their enemies and developed and assimilated them into their own. This was the Roman armies strength… no one could keep up to them and adapt as quick. WWI was about who had the biggest firepower, and artillery dominated. WWII was about air superiority – taking the high ground. The Vietnam war was about gorilla warfare. The Gulf war was about technology superiority.

The war on terrorism…well, we are still defining who the enemy actually is. It is hard to fight an enemy you can’t see and who is able to infiltrate your ranks and destroy from within.

The ‘Western World’ was built upon Christian foundations. The world of Islam is invading that territory. The intensity of this battle is increasing.

So let’s look at this:

Islam means “way of submission” and is made up of the Sunni (largest sect), Shia (second largest sect), Sufi (mystics). Muslims are “Historical People” whose perspective of the world and life come from the events of the past. As Westerners, our view of life focuses on the present and the future. Therein lies the clash.

A young man asked Muhammad what is the minimum that he has to do to get into heaven. Muhammad listed the Five Pillars as the minimum:
(1) Recite the Shahada ­ Confession of Faith “La ilaha illa’Llah; wa Muhammadun rasulu’Llah.” “There is no God but Allah; and Muhammad is Allah’s prophet.”
(2) Salat ­ Prayer (formal obligatory prayers 5 times a day, plus informal prayers)
(3) Sawm ­ Fasting during the month of Ramadan
(4) Zakat ­ Tithe; poor due (2%)
(5) Hajj ­ Pilgrimage to Mecca (supposed Abrahamic origins).
Muslims are uncertain if they will go to heaven. Through the practice of the 5 Pillars and the “traditions,” they are confident that if they do go to hell it won’t be for too long.

Surah 112: The Unity, Sincerity, Oneness Of Allah
Say: He is Allah, the One and Only; Allah, the Eternal, Absolute; He begetteth not, nor is He begotten; And there is none like unto Him.

The opposite of Tahwid is sin (shirk), which is associating something or someone with Allah (idolatry). This is the highest degree of blasphemy. You are guilty of sin if you claim something to be Allah that isn’t Allah. Allah is the eternal and absolute. Nothing can compare to him. Nothing can be associated with him. Nothing can partner with him.

In Islam there is no such thing as salvation since we are all considered born in the Best Form. Every child is born a Muslim (the straight path), but our parents and society raise us up in bad things, and then we forget. You aren’t converted in Islam, you’re reverted. Because we are created in the Best Form, we must “remember.” Our sins require a Muslim to constantly purify himself by offsetting their sin with good acts. In terms of fleshly and sinful desires, Muslims do not try to repress them but instead channel and control them.

Muhammad is the last prophet of Allah who has brought the final revelation. Muhammad is not a Muslim’s savior, only a prophet. During his lifetime, Muhammad was a powerful political and military leader. His life was filled with many spiritual experiences (revelations) and political accomplishments, Muhammad did gain power often through unconventional and immoral means. Muhammad had 23 wives (plus concubines). His favorite wife (Aishah) was engaged to him at the age of six and married when she was 9 years old. He died in 632 AD. Muhammad is said to have loved three things: “Women, Perfume, and Fine Clothes”

Quran 3:85: If anyone desires a religion other than Islam (submission to Allah), never will it be accepted of him; and in the Hereafter he will be in the ranks of those who lost (all spiritual good).

God Is. God rules; God creates; God sends; God guides; God ordains; God has mercy; God judges. The Quran teaches Allah’s sovereignty, his power, his mercy, his greatness. Allahu akbar ­ “God is Great!” This literally means “God is Greater”, because you cannot say “God is Greater than …” because that is comparing him to something.

Muhammad and the Quran teach that Allah is the God who is to be served.

In contrast, Christianity teaches that Jesus is the God who came to serve.

The Quran is overtly anti-Christ. It denies his death and resurrection. The Quran rejects Jesus as the Son of God (Quran 4:171), and states that Jesus is not the sacrifice of God (Quran 4:157). The Bible and the Quran are inherently opposed and you cannot reconcile the two on this issue. Because the Quran strongly and continually denies Christ, there is a side to the Quran that is overtly demonic in inspiration. Many Muslims and Christians affirm that the Quran has a tremendous amount of influence and power, with the help of spiritual forces.

The entire witness of the Quran is to Allah’s power, sovereignty, and greatness. In the hierarchy of power Allah is on the top with everything else far below. Allah is all powerful and all responsible, therefore I have limited power and responsibility. The Arabic word for fate and power are related.

The defining characteristic of Allah is Power, not justice, mercy, or love. Morality is even subordinated to God’s power. This is seen in a Muslim’s view of heaven (wine, young virgins, young boys), and in the life of Muhammad (Aishah, 9 year old wife). Justice is subordinated to God’s power. Justice in Islam is seen as the punishment of people who do not obey Allah. Allah is impersonal and arbitrary in the practice of power.

Because there is no access to Allah through love, Muslims seek his power (Blessings) through acts and through folk practices ­ very impersonal and mechanical. Muslim families instill and promote these acts and folk practices as the means to control and receive Allah’s blessing.

Islam draws people because there are clear expectations with little ambiguity. Islam gives structure and discipline. Relational motivation is not important in Islam, it’s the doing. Somebody who is beaten up by relationships can come and not have to face the pains of relationships. Instead fear operates over their desire for relationship. Sometimes this relational ethic is enforced by the family and culture in dysfunctional ways.
However Islam is not unconcerned with the family and society. Remember that Islam is a societal and an urban religion. It is important to serve your parents into their old age. Family is central in Islam. “I believe in the God and religion of my father, grandfather, great grandfather.”

In Islam it’s not “What you Believe,” but it’s “What you Do.” The emphasis is on the doing rather than the believing. In Islam the emphasis is on right doing, whereas Christians emphasize right doctrine and theology. Remember the Quran reveals the will of God and not the character of God. A Muslim is one who submits. It is through submission to Allah and his will that brings peace and blessings. Muslims think of Christianity as too complex because it’s all theology and no law. They view Christianity as overemphasizing faith/love and forsaking the law. Likewise Judaism overemphasized the law and lost it because of their mistakes. Muhammad integrated both law and faith/love.

While the Quran teaches just and moral living, Islamic life is much different, especially for women. There are only 5 countries in the World where the life expectancy of women is shorter than men and ALL are Muslim Countries.

As you can see, the complexities of this battle between these two faiths is almost too hard to fathom. But will you actively take a stand? To do so means you must choose between the sides… you can not afford to sit on the fence. The reality is that we must come to grips with it or we will just become victims or cannon fodder as the battle rages around us. If we wait until it impacts directly upon our life…it maybe too late, and disastrous, once the enemy has busted down the door of your home… the best defense is offense. At some point you will need to make a stand… or you will be forced to comply to desires of the victor.

But if serving the LORD seems undesirable to you, then choose for yourselves this day whom you will serve, whether the gods your ancestors served beyond the Euphrates, or the gods of the Amorites, in whose land you are living. But as for me and my household, we will serve the LORD.”
Joshua 24:15

Therefore, my encouragement to my Christian Brothers and Sisters is this:

Don’t be intimidated by the Quran or the religious intensity of Islam. If we are living full Christian lives, Christianity is much more richer and fuller than Islam. Consider the parallel parts of the Christian lifestyle to the Muslims’ religious life (confession of faith, prayer, tithing, the fast, the pilgrimage). In Christianity, our commitment to God is much higher, and we have deeper convictions behind our religious actions. Remember though that we live by the law of grace and they are under the law of Islam.

Don’t be a wimpy Christian! Muslims don’t respect those who waver in their faith. They may dislike what we say more than a liberal Christian, but they will deeply respect us.

Be natural about your love for Christ. They are natural in expressing their own Muslim beliefs. For Muslims, the things of God are not a private thing. Be open and natural. Share what you’re learning from the Lord that day. Pray with them, read the Bible with them, read through the Prophets, discuss the Bible, pray using the Bible, etc.

Love your Muslim friend. Be genuine in your friendship and not just to ‘convert’ them.  Muslims have good reason to be full of fear and distrust. We must, at all cost, love… for this is the key strategy to winning this war!

… sanctify Christ as Lord in your hearts, always being ready to make a defense to everyone who asks you to give an account for the hope that is in you, yet with gentleness and reverence.1 Peter 3:15

The worse thing a person can do… is nothing.

Australia is built upon Christian foundations and we must defend that position actively before it is undermined.

This is not just from Islam but many minorities that are hell bent on destroying the freedoms we have in this country. It is those very freedoms that allow these groups to exist in this country in the first place! Just look to any countries that have allowed the changes being advocated…and you will quickly realise it is not acceptable and that there is not the same freedom we are privileged to experience here.

If we believe we want to maintain our Christian heritage in Australia, support the current calls to mobilise through organisations like ACL and the Make A Stand campaigns – these are the real issues and they matter.

Know this: The enemy is at the gate!