ANZACs: What can we learn from our mates, the Diggers? 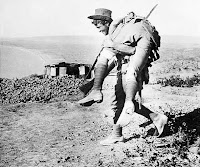 The Australia and New Zealand Army Corps (ANZAC) was part of the Mediterranean Expeditionary Force that was formed in Egypt in 1915 and operated during the Battle of Gallipoli.

Due to the trench-digging aspects of the war, the ANZACs ascribed to themselves and their mates a slang term of affection, “digger’.

‘Digger’ and ‘dig’ were used by soldiers as friendly terms of address equivalent to ‘cobber’ and ‘mate’ … The term has tended to be defined in high-value laden ways … ‘a man for whom freedom, comradeship, a wide tolerance, and a strong sense of the innate worth of man, count for more than all the kingdoms of the world, and the glory in them.’
A G Butler, The Digger: A Study in Democracy, 1945 in The Oxford Companion to Australian Military History, p 213

Aussie Diggers became known for their bravery, suffering, larrikin spirit and the amazing bond of ‘mateship’. The landings on the beach at Gallipoli remain a defining moment for Australia as a nation and continue to be remembered on ANZAC Day (April 25th) each year.

In The Broken Years (1974), a study of ANZAC soldiers, Bill Gammage concluded that ‘mateship was a particular Australian virtue, a creed, almost a religion‘.

Over the years, the Australian mateship was forged through the experience of trench warfare, concentration camps, hunger, injury, forced labour and the boredom and terror of war.

In the [Japanese POW] camps the Australians discarded their differences and became a tribe, a tribe which was always the most successful group. The core of this success was an ethos of mateship and egalitarianism which not only survived the ultimate dehumanising duress of the death camps, but shone through as the dominant Australian characteristic.
Paul Sheehan, Among the Barbarians, 1998

On November 10, 2003, when the Prime Minister John Howard delivered a speech at Australia House in London, he said:

The two world wars exacted a terrible price from us – the full magnitude of that lost potential, of those unlived lives can never be measured. And yet, some of the most admirable aspects of Australia’s national character were, if not conceived, then more fully ingrained within us by the searing experiences of those conflicts. None more so than the concept of mateship – regarded as a particularly Australian virtue – a concept that encompasses unconditional acceptance, mutual and self respect, sharing whatever is available no matter how meager, a concept based on trust and selflessness and absolute interdependence. In combat, men did live and die by its creed. ‘Sticking by your mates’ was sometimes the only reason for continuing on when all seemed hopeless. I was moved by an account written by Hugh Clarke, who, like thousands of other Australian and British servicemen, endured years of senseless cruelty as a prisoner of the Japanese after the fall of Singapore. He couldn’t recall a single Australian dying alone without someone being there to look after him in some way. That’s mateship.

Mateship between soldiers helped define their manhood, and in turn, this helped define Australia as a nation. A nation foundered on Christian principles.

To all our fallen mates, the Diggers and those who fought to defend the freedoms of this nation, thank you.
LEST WE FORGET. 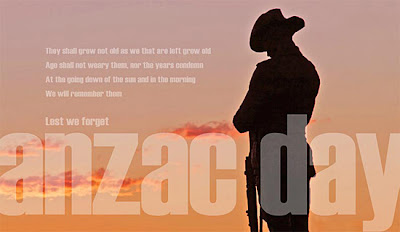