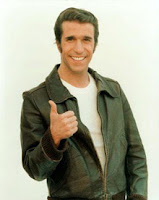 “I was wr… I was wro…, I was wrooon…” was famously stammered by Arthur ‘Fonzie’ Fonzarelli in “Happy Days” (1974). The Fonz could never admit he was wrong. This character, played by Henry Winkler, was the symbol of the coolest leader, who had it all together.

Everyone, watching the show, could see that The Fonz was just as insecure as the rest. Except around his friends, he was able to put on a hypocritical mask most of the time. His actions did not always live up to his reputation…and reputation was everything to him.

Interestingly we see a similar thing happening in the Bible when Paul opposes Peter for being a hypocrite.

When Peter came to Antioch, I opposed him to his face, because he was clearly in the wrong. Before certain men came from James, he used to eat with the Gentiles. But when they arrived, he began to draw back and separate himself from the Gentiles because he was afraid of those who belonged to the circumcision group. The other Jews joined him in his hypocrisy, so that by their hypocrisy even Barnabas was led astray.
Galatians 2:11-13

Just as The Fonz led his friends astray, so did Peter. Even ones who were quite strong in the Faith, like Barnabus.

It is interesting that the motivation behind these hypocritical stances was fear. For The Fonz it was the fear of loosing his reputation. For Peter, it was fear of rejection from his fellow Jews.

Paul was right to confront Peter, to his face. It was a big call to do so, because Peter was a pillar of the church… but Paul’s desire to ensure the Gospel is preached clearly in both word, and deed, was paramount. Fear did not motivate Paul, but love did:

There is no fear in love. But perfect love drives out fear, because fear has to do with punishment. The one who fears is not made perfect in love. We love because he first loved us.
1 John 4:18,19

It makes me think, are my convictions sure? Because I am motivated by love, will I step up to the mark and confront hypocracy when it presents itself? Would you? Will you?