Are you wealthy? Want to be? Here’s a thought…

Recently I wrote about surviving the financial crisis,  the  ‘history of money’, and what it was to have some wisdom on acquiring true wealth.  These posts discussed wealth in terms of money and financial well being.  But recently, when discussing this topic, a man in my Life Group made this comment:

I have a great wife and two lovely children. I live in a great country, in a home with no mortgage and am debt free. I have enough income to pay my bills, live comfortable and give some away to help others. I consider myself to be wealthy.
Name withheld.

I actually liked this man’s definition of being wealthy. It not only included his financial status but also the richness found in his family and the country he lived in – mentioned in order of priority, I might add. He considered these as a part of his wealth. 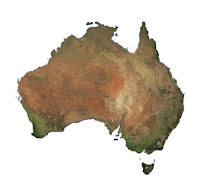 He lives in the country pictured to the left. What is the name of that country?

Did you just answer with the one word, Australia?

The Constitution stipulated that Australia was a constitutional monarchy, where the Head of State is the British (or, since 1942, Australian) monarch, who is represented at the federal level by a Governor-General, and at the state level by six Governors, one for each state. The Parliament of Australia was derived from the British, Canadian and American systems to form a uniquely Australian system. It is largely based on the British Westminster System, adopting many of its practices and precedents, but with a similar structure — House of Representatives, and Senate — to the U.S. Congress.

In an Australian context, the term “Commonwealth” (capitalised) thus refers to the federal government and “Commonwealth of Australia” is the official name of the country.[1]

The English  noun commonwealth means “public welfare; general good or advantage” dates from the fifteenth century.  The original phrase “the common-wealth” or “the common weal” (echoed in the modern synonym “public weal”) comes from the old meaning of “wealth,” which is “well-being.” The term literally meant “common well-being”. In the seventeenth century the definition of “commonwealth” expanded from its original sense of “public welfare” or “commonweal,” to mean “a state in which the supreme power is vested in the people; a republic or democratic state.”[1]

Living in a country that is founded on, and believes in, the common well-being of it’s citizens is a privilege. Maybe when Australians are asked the question, “What country do you live in?” they would correctly answer, the “Commonwealth of Australia”.

Pedantic? Possibly. But I believe that if more emphasis was placed upon the word, ‘commonwealth’, more often, we would not have those who are recent immigrants to Australia wanting to change it to be exactly like the countries in which they have left or deserted.  I’m not saying to abandon their customs or culture entirely, but to bring to the Australian cultural mix that which compliments it and not that which wants to radically make it exactly like some other culture. Each citizen’s contribution should only ‘add’ to the Common Wealth, or the Common Well-being of this nation.

The challenge is for all of us too… not just those who are recent immigrants. We must all continue to add to the Common Wealth of this country.

And we have been doing quite well so far. The Economist Intelligence Unit’s Global Liveability Rating quantifies the challenges that might be presented to an individual’s lifestyle in 140 cities worldwide. Each city is assigned a score for over 30 qualitative and quantitative factors across five broad categories: Stability, Healthcare, Culture and Environment, Education, Infrastructure. Out of the Top 10 Most Livable Cities in the World, the Commonwealth of Australia had 4 of its cities listed in January 2010!

Based on Australia’s Christian heritage, I believe that God has given us all a hint on how we can continue to achieve this:

You, my brothers and sisters, were called to be free. But do not use your freedom to indulge the sinful nature; rather, serve one another humbly in love.   For the entire law is fulfilled in keeping this one command: “Love your neighbor as yourself.”  If you keep on biting and devouring each other, watch out or you will be destroyed by each other.
Galatians 5:13-15

For a Christian, this is made possible because they are filled with the Holy Spirit. Therefore:

So I say, walk by the Spirit, and you will not gratify the desires of the sinful nature.  For the sinful nature desires what is contrary to the Spirit, and the Spirit what is contrary to the sinful nature. They are in conflict with each other, so that you are not to do whatever you want.  But if you are led by the Spirit, you are not under the law.   The acts of the sinful nature are obvious: sexual immorality, impurity and debauchery;   idolatry and witchcraft; hatred, discord, jealousy, fits of rage, selfish ambition, dissensions, factions  and envy; drunkenness, orgies, and the like. I warn you, as I did before, that those who live like this will not inherit the kingdom of God.  But the fruit of the Spirit is love, joy, peace, patience, kindness, goodness, faithfulness,  gentleness and self-control. Against such things there is no law.  Those who belong to Christ Jesus have crucified the sinful nature with its passions and desires.  Since we live by the Spirit, let us keep in step with the Spirit.   Let us not become conceited, provoking and envying each other.
Galatians 5:16-26

To the Commonwealth of Australia, we, its citizens, are indeed wealthy.