Wisdom: The Mark of The Beast 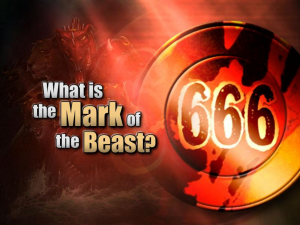 There has been a lot of theories about the Mark of The Beast. It has kicked off heaps of hoaxes and fear mongering over many years. So, here are my thoughts on the matter. I too am seeking wisdom…and may not have this correct either… I remain willing to be corrected or indeed exposed to further wisdom.

X ξ Ϛ …in servitude to one’s own interest.

I believe the “number” is neither a numeral, a code, a person, nor the name of an individual.

The reference to this “number” is found in Rev. 13:16-18, as written by the Apostle John. It reads as follows:

Rev. 13:16, “And he caused all, both small and great, rich and poor, free and bond, to receive a mark in their right hand or in their foreheads,

Rev. 13:18, “Here is wisdom, let him who has understanding calculate the number of the beast, for it is the number of a man. His number is 666.”

When reading this translation it seems obvious, because of such words as “number” and “calculate”, to expect the “number” to be a numeral. All bible copies, even as far back as the Codex Sinaiticus (4th century), have translated the old Greek text (X ξ Ϛ) to mean the numeral “666”. Instead of helping to recognize the identity of this beast, the use of the “666” has fertilized people’s imagination to distort the truth.

The choice of meaning of Greek words is greatly dependent upon the context of the message. Verses 16 to 18 are not referring to a context of numerical interpretation but to one of belief identification within an international forum, in which this dominant world power (beast) has the ideological, political, economic, and military influence to control one’s (a nation’s) access to buy and sell (trade) based on that nation’s allegiance to this empire’s image, mark, name, or number of it’s name. This “number” is associated with the beast, its mark, its name, and man.

In order to understand the message it is important to pay closer attention to the meaning of the Greek text (Greek English Lexicon, Liddell & Scott, 9th edition) for the words, receive, mark, name, number, calculate, and “X ξ Ϛ”.

These other meanings of the Greek words clearly refer to a context of character and values identification!

In Greek new testament texts, the X ξ Ϛ will be followed by a stroke notation (X ξ Ϛ´) above and to the right of the letters to indicate a numerical interpretation. It is important to note that this convention was acquired during the Byzantine Empire, 4th – 15th century. This stroke notation was therefore not part of the original text. It was also common practice for interpretations to be edited into scripture. Taking into consideration the duality of the Greek alphabet to act as letters or numerals and the scribes’ assumption to interpret the Greek word “αριθμoν” to signify numeral, the translators interpreted and added the letters X = 600, ξ= 60, and Ϛ = 6, producing 666.

However, X ξϚ has also another meaning.

The numerical interpretation does not make sense for 3 significant reasons.

XξϚ (as three individual symbols = as one meaning)

The roots of the Greek alphabet are found in the ancient Semitic and Egyptian symbols. Each symbol represented a meaning.

Therefore X ξ Ϛ = oneself + support + in servitude to.

In servitude to support oneself. The desire to serve one’s own interests / to do one’s own will.

What is the significance of this interpretation?

Rev. 13:17, “…and that no nation will be permitted to trade except the ones that have the distinction (mark) or the character (name) of this world power (beast), or that value (number) his character (name).”

This message is also confirmed by the writings of the prophet Daniel in Daniel 11:36-39.

(Note: This is the description of the last king/world power before the return of Jesus Christ.)

Daniel 11:36; “Then the king shall do according to his own will; he shall exalt and magnify himself above every god, shall speak blasphemies against the God of gods, and shall prosper till the wrath has been accomplished; for what has been determined shall be done.”

Daniel 11:37; “He shall regard neither the God of his fathers nor the desire of women, nor regard any god; for he shall magnify himself above them all.”

Daniel 11:38; “But in their place he shall honor a god of fortresses; and a god which his fathers did not know he shall honor with gold and silver, with precious stones and pleasant things.”

Daniel 11:39; “Thus he shall act against the strongest fortresses with a foreign god, which he shall acknowledge, and advance its glory; and he shall cause them to rule over many, and divide the land for gain.“

Does it exist today?

The world is presently living in the presence of this dominant power. Economic sanctions on a global level have been imposed on countries which have shown flagrant disregard for its ideological foundation, the freedom of rights of man. Today, more than 75% of the world’s nations have willingly embraced and have become democracies. Recently Tunisia, Egypt, Lybia have embraced this way and others (Syria, other Middle East nations, Ukraine, etc) are demanding to receive it.

No nation is able to make war with (conquer) the beast (Rev.13:4) either militarily or politically (=spiritually). Its way (through capitalism) also offers the most prosperous economic rewards on earth (Rev.18:11-15). Even China is embracing it.

This primary belief has already unified the majority of nations, all the while respecting their “cultures/religions” (fortresses), and will, in the near future, unify all of mankind under the belief of universal values and freedom of rights. This “belief unification” is also reinforced by the ever growing global economic interdependence (capitalism is a powerful tool for spreading democracy).

This world unified belief in “individual self-rights” is the goal of Satan in the preparation for the confrontation, both spiritual and military, against the return and rule of Jesus Christ, the Son of God, against the kingdom of God.

Dare I say that it is evident to me that the identity of this empire (beast) is that of the United States of America, leader and promoter of democracy / freedom of rights, in conjunction with its world partners and mankind.

Recently, we have seen the people of Tunisia and Egypt overthrow their governments in order to embrace this way and belief. Israel has proclaimed that it is a land of all faiths and Iran is being isolated and under pressure to change, and it will. The prophetic words in Daniel, the Trumpets #1-3 in Revelation 8, and the Bowls #1-3 in Revelation 16 are being fulfilled.

The non-democratic governments feel the pressures from outside and within their countries to change and to adopt democracy. They are trying to resist this conversion by using internal as well as external forces. Their resistance will be overcome in time to unify all of man into one “way of life” (Revelations 16:12-14) which is against the return of Jesus Christ who will come unexpectedly because man will believe he has “peace” and Christ will be seen as a thief coming (1 Thessalonians 5:2) to take away what man cherishes the most.

Will of man or the will of the True God:

The U.S.A. embodies, on the global stage, each man’s desire for the freedom to do and justify his own will. Man has chosen to live and to fulfill his physical, emotional, and spiritual needs according to what he believes and justifies to be right and wrong, good or evil. It is important to highlight that these choices are based on man’s will and are not based on the absolute truths established by God. Even the belief in God has been decreed by man to be an “expression of a religious freedom”. The above are witnessed in excerpts from the Declaration of Independence and in the Constitution of the United States:

Declaration of Independence:
“We hold these truths to be self-evident, that all Men are created equal, that they are endowed by their Creator with certain unalienable rights, that among these are Life, Liberty, and the Pursuit of Happiness-….”

Constitution of the United States, Article the third (Amendment I)
“Congress shall make no law respecting an establishment of religion, or prohibiting the free exercise thereof…”

These words clearly reflect the scriptural prophecies that we have read and seen in Daniel 11:36-39.

Where is the faith in and servitude to the one and only true God and the desire to do His will? God does not accept man’s will to worship beliefs of his own creation. By doing so man rejects God’s existence as the True God and places himself in the position above God. This is blasphemy in the eyes of The Most High as declared in the First Commandment.

God’s desire is for man to embrace and to do His will, which is absolute love for God and for those around us, and to receive the gift of eternal life.

Jesus Christ, the Son of God, summarised well this “servitude and love” on the Mount of Olives prior to his capture, torture, death, and resurrection.

“Father, all things are possible to thee
Allow me from this cup
Another I will not, other than Your Will”
(correct interpretation from the Greek text)

Jesus did this as an act of sacrifice, love, and forgiveness for those who repent and follow Him.

As God’s Holy Spirit is here now, we must serve Him now as King. And this is where to begin.