What does ‘success’ mean to you? 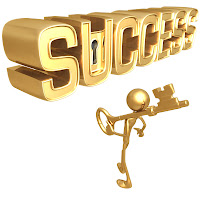 My dad once told me that he considered he would be successful only if he owned a Jaguar car, a big and beautiful home, be well off with plenty of money in the bank, be in good health, had a good wife, and two kids he could be proud of.  And in that order!

He worked himself ragged in pursuit of that dream. He acquired the wife and had two children early… but this was not his complete picture of success.

He finally bought his XJS Jaguar for cash. And was devastated the day he found rust in some of the weld joints under the bonnet. He bought homes, always bigger, better and more expensive than the last and in prestigious neighborhoods. But in his last business deal, driven by greed and the desire to fulfill his vision of success, it nearly sent him to the wall. He had to radically downsize and now lives in a small cottage, with a little car, with very little money to spare. Stress and disappointment caused his health to deteriorate and he faced a heart operation with a low expectancy to live beyond it.

But at that time he discovered the Good News of Jesus Christ. After a miraculous heart operation, both physically and spiritually, he spends his days now in the company of his good and faithful wife, my mum, and he is very proud of my sister and I. In these three, he now believes them to be his greatest success.

It took my dad the majority of his life, climbing a crumbling ladder to success, only to discover what real success was for him.

Then there was a chemist from Sweden who made his fortune by inventing and patenting dynamite and other explosives used for weapons. Later in life his brother died. A newspaper accidentally reported the wrong brother’s death and printed an obituary for the brother who was still alive. The article described the living brother as a man who had become rich by inventing the means for people to kill each other in large numbers. The living brother was so disturbed by this frank evaluation of his life, that he determined to use his fortune to honour those whose work was beneficial to humanity. This man was Alfred Nobel and he established the Nobel Peace Prize.

Success means different things to each of us. If not properly defined, our pursuit maybe hijacked and with disastrous results.

These men were considered the ‘movers and shakers’. Successful men that many others envied and wished they could have what these men had.  Yet something went terribly wrong with these men’s lives. Within Twenty-five years:

Was this the price for their concept of success?

It is good to take some time to evaluate our life’s journey, seek wisdom and understanding, and ensure that our definition of success is worth pursuing.

Our success has much to do with the values of caring, sacrifice, character and contribution … You were meant to succeed authentically in all vital areas of your life and to make a positive difference with your life.
Dr. Ron Jensen in his book, ‘Achieving Authentic Success’

For me, I love what a wise dad once wrote to his son:

My son, if you accept my words and store up my commands within you,   turning your ear to wisdom and applying your heart to understanding—  indeed, if you call out for insight and cry aloud for understanding,  and if you look for it as for silver and search for it as for hidden treasure, then you will understand the fear of the LORD and find the knowledge of God.   For the LORD gives wisdom; from his mouth come knowledge and understanding.   He holds success in store for the upright, he is a shield to those whose walk is blameless, for he guards the course of the just and protects the way of his faithful ones.   Then you will understand what is right and just and fair—every good path.   For wisdom will enter your heart, and knowledge will be pleasant to your soul.  Discretion will protect you, and understanding will guard you.
Proverbs 2:1-11

What do you consider success?

When will you know you have achieved it?