Have you ever witnessed the haunting melody we now know as “Taps” that is used whenever a man or woman is buried with military honors. The ceremony is concluded by firing three volleys of musketry over the grave, and sounding with the trumpet or bugle … “Taps”.

From the Military District of Washington, D.C. (archives): 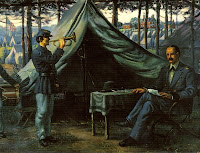 During the Civil War, in July 1862 when the Army of the Potomac was in camp, Brig. Gen. Daniel Butterfield summoned Pvt. Oliver Wilcox Norton, his brigade bugler, to his tent. Butterfield, who disliked the colorless “extinguish lights” call then in use, whistled a new tune and asked the bugler to sound it for him. After repeated trials and changing the time of some notes which were scribbled on the back of an envelope, the call was finally arranged to suit Gen. Butterfield and used for the first time that night. Pvt. Norton, who on several occasions, had sounded numerous new calls composed by his commander, recalled his experience of the origin of “Taps” years later:

“One day in July 1862 when the Army of the Potomac was in camp at Harrison’s Landing on the James River, Virginia, resting and recruiting from its losses in the seven days of battle before Richmond. Gen. Butterfield summoned the writer to his tent, and whistling some new tune, asked the bugler to sound it for him. This was done, not quite to his satisfaction at first, but after repeated trials, changing the time of some of the notes, which were scribbled on the back of an envelope, the call was finally arranged to suit the general.

“He then ordered that it should be substituted in his brigade for the regulation “Taps” (extinguish lights) which was printed in the Tactics and used by the whole army. This was done for the first time that night. The next day buglers from nearby brigades came over to the camp of Butterfield’s brigade to ask the meaning of this new call. They liked it, and copying the music, returned to their camps, but it was not until some time later, when generals of other commands had heard its melodious notes, that orders were issued, or permission given, to substitute it throughout the Army of the Potomac for the time-honored call which came down from West Point.

In the western armies the regulation call was in use until the autumn of 1863. At that time the XI and XII Corps were detached from the Army of the Potomac and sent under command of Gen. Hooker to reinforce the Union Army at Chattanooga, Tenn. Through its use in these corps it became known in the western armies and was adopted by them. From that time, it became and remains to this day the official call for “Taps.” It is printed in the present Tactics and is used throughout the U.S. Army, the National Guard, and all organizations of veteran soldiers.

Gen. Butterfield, in composing this call and directing that it be used for “Taps” in his brigade, could not have foreseen its popularity and the use for another purpose into which it would grow.

Today, whenever a man is buried with military honors anywhere in the United States, the ceremony is concluded by firing three volleys of musketry over the grave, and sounding with the trumpet or bugle “Put out the lights. Go to sleep”…There is something singularly beautiful and appropriate in the music of this wonderful call. Its strains are melancholy, yet full of rest and peace. Its echoes linger in the heart long after its tones have ceased to vibrate in the air.”

While there are no real ‘official’ words to “TAPS”, the following are the most popular:

Day is done,
gone the sun,
From the hills,
from the lake,
From the skies.
All is well,
safely rest,
God is nigh.

Go to sleep,
peaceful sleep,
May the soldier
or sailor,
God keep.
On the land
or the deep,
Safe in sleep.

Love, good night,
Must thou go,
When the day,
And the night
Need thee so?
All is well.
Speedeth all
To their rest.

Fades the light;
And afar
Goeth day,
And the stars
Shineth bright,
Fare thee well;
Day has gone,
Night is on.

Why this Reflection today?

Do not cause anyone to stumble, whether Jews, Greeks or the church of God— even as I try to please everyone in every way. For I am not seeking my own good but the good of many, so that they may be saved.
1 Corinthians 10:32,33

Therefore, as of today, my reflections will remain private and no longer be published.

For those who have followed, encouraged me and cheered me on, thank you.

To all, and in the words of Paul, I echo:

Now to him who is able to establish you in accordance with my gospel, the message I proclaim about Jesus Christ, in keeping with the revelation of the mystery hidden for long ages past, but now revealed and made known through the prophetic writings by the command of the eternal God, so that all the Gentiles might come to faith and obedience— to the only wise God be glory forever through Jesus Christ! Amen.
Romans 16:25-27