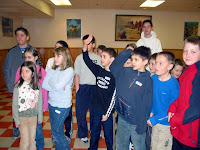 Ever been the kid who stands in the pack at school while two team captains pick who they want on their team? The biggest, fastest, best ones first. Wasn’t it good when a mate of yours was chosen first and influenced the Captain to pick you?And wasn’t it really bad when you get picked last. Even worse is when you get ‘given’ to the other side by the captain whose turn was to pick you last.

As a kid, I really hated those other bigger, faster, best picked kids, and at first, the Captain. I empathised with the remaining pack. But I loved it, once I was picked…

The ‘world’ is like that pack of waiting kids. The Captain is the one ‘hated first’.

But Jesus chose me. He chose YOU.

Did you accept the invitation to play? (If not, you can accept HERE.)

If you did accept, are you ready to play the Game?