Nope! No way! Forget it! 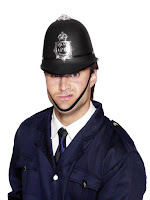 A young police officer who was taking his final exam at Hendon Police College in North London. And the first three questions in this exam were relatively easy. And then he got to question four.

`You’re on patrol in outer London when an explosion occurs in a gas main in a nearby street. On investigation, you find that a large hole has been blown in the footpath and that there is an overturned van lying nearby. Inside the van there’s a strong smell of alcohol. Both occupants, a man and a woman, are injured. You recognise the woman as the wife of your Divisional Inspector, who is at present away in the United States.

A passing motorist stops to offer you assistance, but you realise that he is a man who’s wanted for armed robbery. Suddenly another man runs out of a nearby house shouting that his wife is expecting a baby and the shock of the explosion has made the birth imminent.

Another man is crying for help, having been blown into an adjacent canal by the explosion, and he cannot swim. Bearing in mind the provisions of the Mental Health Act, describe in a few words what actions you would take.’

The police officer thought for a moment, picked up his pen and wrote:

`I would take off my uniform and mingle with the crowd.’

Alpha’s Nicky Gumbel, who tells this story above, also said, “That’s always the temptation— to take off our Christian uniform and mingle with the crowd, to be like everybody else, because it’s so much easier. But what we’re called to be is distinctive—to retain our Christian identity wherever we are, whatever the circumstance”.

Could you retain your Christian identity wherever we are, whatever the circumstance?

Even Peter denied Christ three times when put under pressure.

As Simon Peter stood warming himself, he was asked, “You are not one of his disciples, are you?” He denied it, saying, “I am not.” One of the high priest’s servants, a relative of the man whose ear Peter had cut off, challenged him, “Didn’t I see you with him in the olive grove?” Again Peter denied it, and at that moment a rooster began to crow. John 18:25-27

Jesus even warned Peter that this would happen:

Peter asked, “Lord, why can’t I follow you now? I will lay down my life for you.” Then Jesus answered, “Will you really lay down your life for me? I tell you the truth, before the rooster crows, you will disown me three times! John 13:37,38

But when the pressure comes will we have the strength to retain our Christian identity wherever we are, whatever the circumstance?

Be encouraged because even though Peter did not have the strength at the time where he denied Christ three times, it was the very thing that forged in him the resolve never to do that again. We see that after this failure event, Peter did amazing, bold an audacious acts where he never ever denied knowing Christ again.

Do you have the strength to retain your Christian identity wherever you are, whatever the circumstance?