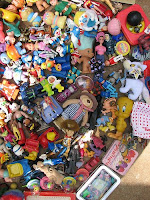 The family room looked like a bomb had hit it. There was not a single gap, to place your foot, without debris underfoot. The kids were having a ball and every toy known to man was strewn everywhere.

Their mum graciously announced that dinner would be in 30 minutes, time for a bath and the cleanup had to begin now.

A second call and a little more pressing.

Time to call in the big guns! Dad. “Right, all toys to be packed up now, or I’ll go and get a green rubbish bag.“

So, I went and got a large green rubbish bag. Returned and waded into the toys picking up random handfuls and throwing them into the bag. The burst of sheer terror swept across their little faces as the realisation of what I was doing hit their reality. They began to frantically scurry around the room saving as many of their favorite toys as they could. The cleanup done in record time.

The pleading began. But this time I simply said, “Bath. Now.” Their little whimpers trailed off into the bathroom. The loss of toys unbearable, but little did they know that I didn’t throw them in the rubbish as they assumed. I never said I would… but they had made that assumption. Without them knowing, over the following month, I gradually restored their toys to their toy box.

For years after, if they ignored the request to ‘clean up’, I only had to ask if I needed to get a green bag. Their humbled response was always immediate.

At the end of that time, I, Nebuchadnezzar, raised my eyes toward heaven, and my sanity was restored. Then I praised the Most High; I honored and glorified him who lives forever. His dominion is an eternal dominion; his kingdom endures from generation to generation. All the peoples of the earth are regarded as nothing. He does as he pleases with the powers of heaven and the peoples of the earth. No one can hold back his hand or say to him: “What have you done?”
Daniel 4:34,35

God, our Father in Heaven, does the same to us. We see, in the Book of Daniel, what He did to King Nebuchadnezzar to humble him and have his perspective restored to a rightful place.

Now I, Nebuchadnezzar, praise and exalt and glorify the King of heaven, because everything he does is right and all his ways are just. And those who walk in pride he is able to humble.
Daniel 4:37

The Father loves his children and the humbling hand of correction only comes to those He loves.