The Writing is on the wall, Australia!

“Pffft! They better do something about it! The writing is on the wall!“. The warning plea of impending danger. 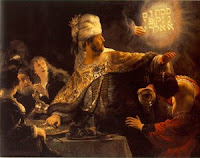 Who hasn’t heard that expression before? Interestingly it comes from the Bible:

Suddenly the fingers of a human hand appeared and wrote on the plaster of the wall, near the lampstand in the royal palace. The king watched the hand as it wrote. His face turned pale and he was so frightened that his legs became weak and his knees were knocking.
Daniel 5:5,6

How would you stand up? Would God have grabbed your attention too?

When things go wrong, we seem to always see the tell tale signs afterward. Retrospect is a wonderful thing.

I wonder how we will go in regards to the Australian Bill / Charter of Rights?

The Australian Christian Lobby (ACL) informs us that it is opposed to such a Bill or Charter of Rights because:

ACL have a paper (PDF Document) explaining it. And you can read all about it in the Issues in Brief.

I don’t have the where-for-all to wade intelligently into this political debate… however, based on my limited understanding, I do agree with the ACL.

The deadline for submissions is tomorrow, June 15th.

In this matter, do we see the writing on the wall?