Its good to be the king! 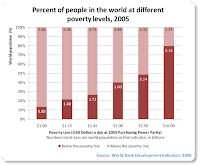 2.2 billion Children exist in the world, 1 billion are in poverty. According to UNICEF, 25,000 children die each day due to poverty. And they “die quietly in some of the poorest villages on earth, far removed from the scrutiny and the conscience of the world. Being meek and weak in life makes these dying multitudes even more invisible in death.**

Nearly a billion people entered the 21st century unable to read a book or sign their names. Less than one per cent of what the world spent every year on weapons was needed to put every child into school by the year 2000 and yet it didn’t happen.**

Speak up for those who cannot speak for themselves, for the rights of all who are destitute. Speak up and judge fairly; defend the rights of the poor and needy.
Proverbs 31:8,9

Australia is one of the richest countries in the World. We can hardly comprehend the statistics above. We live like kings.

And as Australian Christians we serve at the pleasure of The King. And He has made it clear what He thinks about all this. He has asked us to speak up for those who can’t and to defend the rights of those who are poor and needy.

Now, one man can’t do this by himself. It is an impossible task. But I can do my bit. You can do your bit. Everyone doing their bit will bring about change.

But how? Firstly, let me share what Jonas j. Borntreger* discovered:

One of the most eye-opening experiences of my life happened on a mountain on the west edge of El Paso, Texas. I stood on that mountain and looked over the Rio Grande Valley. At El Paso the Rio Grande is actually not all that ‘grande,’ but oh, the difference that ditch makes as it flows through that valley. I stood on that mountain; the sun went down behind me, a full moon rose before me, and the lights came on in the valley below.

Why is there this very obvious discrepancy between the two sides of the ditch? Does one side get more rain or sunshine? Is the soil better on one side than the other? Does one side have access to better materials for creating buildings? Does the wind that blows for good blow for evil on the opposite shore? Why does the murky haze I see to the south end abruptly at the Rio?

The answers became obvious: The only differences are ideological. The only real differences are in the way people see themselves, their neighbors, and the world around them; the way they act, and interact with each other; it lies in the how, and the why of the choices they make. If there was a chance that money flowing south would have made a significant difference in the Rio Grande Valley, then that little ditch, flowing between two cities would not have been able to prevent it from happening.

The conclusion that the only differences are ideological is an eye-opener.

The Christian has a lot to offer in this regard.

We can PRAY and ask God for help. We can be specific and pray for those working to make a difference, and ask how we can be of more assistance, wisdom, keys for breakthrough, etc.

And then we could GIVE. That’s okay too, but consider these guidelines*:

First is the ‘Caesar or God’ principle. If your finances go through the government coffers, the resulting perceived benefits will result in recognition for your government. Gifts in obedience to Christ are a “light that shines before men” and causes the recipients to “glorify our Father in Heaven.”

Secondly, we need to give more than money. The Good Samaritan got dirt and blood on his robes. He got down where the need was and addressed the basics of a man’s suffering. If poverty’s cause is ideological then true help means changing what people do and what or why they do them. This is hard to accomplish from 5,000 miles away. Loving people involves intimacy; it is more than the good feeling that comes because the cheque is in the mail. Your treasure and your heart will be in the same place; give from the heart.

Thirdly: Leverage efficiency for your gift. It’s the ‘give a man a fish’ principle. Avoid programs that foster dependency. Give a seed; share ideas, recipes and expertise; help finance micro loans; and patronize or build businesses that give people a means for making a living.

My final thought about giving should be obvious for the Christian: Give in obedience to the Holy Spirit. Did that TV commercial make you feel guilty or was it a prompt from Jesus? How do you know to give to the man standing on the street corner or not? Christians should give cheerfully and never because they feel browbeat into it.

As Christians, we also have clear direction as to how God intended the earth to live…and live abundantly. We are commanded through the Great Commission to GO into all the world and share the Good News about Jesus Christ. Short Term Mission trips are a good way to start.

What can you do? You can Pray, Give or Go!