Tiger Woods driving into the wind…will he make it?

When the star of golf, Eldrick Tont “Tiger” Woods, fell beneath the deceptive weight of adultery, it shocked the world. The pedestal that he precariously stood upon was rocked and he fell from grace. People who loved all that he stood for were rightly angry for the deception. His wife, Elin, all the more. His children Sam and Charlie will know the extent of this in years to come.

Most people, like you and me, and especially those thrust into the limelight, are succeptable to being destroyed in 3 ways. Gold, Glory or Girls/Guys. Tiger Woods seemed to handle his fortune and financial affairs in his stride. He was grounded well and Pride was kept at bay, except when he thought he was beyond tackling his desire for other women. He admitted that he used to believe he was entitled to do whatever he wanted to do, and that, due to his success, normal rules did not apply to him… and Girls became his downfall.

Personally, it was the best thing that could have happened to Tiger Woods… not that he was committing adultery, but that he was exposed and brought to his knees for it. His weakness is out in the open… and can be better guarded so that it happens no more… many eyes are now watching.

While the extent of his unfaithfulness is hard to fathom, we must recognise that he has now halted heading down this path. He has taken steps to undo the damage, deal with his addiction, and begin the hard, long process of reconciliation with his family, devastated fans and annoyed business partners. It is so easy to lose trust in an instant, but may take a lifetime to regain it – especially from his wife, Elin.

If anyone has caused grief, he has not so much grieved me as he has grieved all of you to some extent—not to put it too severely.  The punishment inflicted on him by the majority is sufficient.  Now instead, you ought to forgive and comfort him, so that he will not be overwhelmed by excessive sorrow.  I urge you, therefore, to reaffirm your love for him.
2 Corinthians 2:5-8 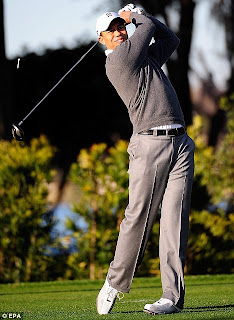 Let us not beat up on him anymore. Let him move forward, step up to the Tee once more, and play the game… maybe a little wiser from now on. And if anyone should think otherwise, consider this: where would you be if you were in his shoes?

We can learn from this… no matter how big, small, famous or not, good or bad, we can all fall from grace in an instant.

Therefore, dear friends, since you have been forewarned, be on your guard so that you may not be carried away by the error of the lawless and fall from your secure position.
2 Peter 3:17