“This fang-dangled you-beaut GPS thingy is as useless as…[fades to indistinguisable mutterring]“, is probably the way I would have described the new GPS as it attempts to redirect my journey off onto the beaten track instead of staying on the Freeway and main highways. Frustrating!

But not so from our Uncle Jack. He would never speak in a derogetory way like that. He would just say that he doesn’t understand how it works and then ask for some help. And he did.

His first mistake was to have set the option to use alternate routing and to avoid Freeways. The second was because Queensland doesn’t allow GPS units to be mounted on the windscreen, Aunty Fay quaintly holds it in her hand on her lap – this covers the internal arial and therefore the signal is very low with a high margin of error…any wonder it couldn’t find where they were at times! 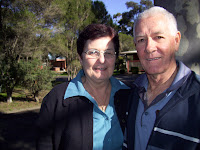 My wife’s Uncle Jack and Aunty Fay just visited us. We are really honoured that they make the effort to travel, by caravan, all the way down to Melbourne from Queensland just to see us.

While getting on in years, you wouldn’t know it. Both are still lively, funny and are a real pleasure to engage in conversation. We can, and do, sit for hours just chatting and can sit just as comfortably together in silence for hours.

The biggest thing that impacted me by this lovely couple is the peace and serenity when with them. It is so joyful and calming. Life is never complicated around them. They keep things simple. Maybe, just maybe, this concept of ‘simple’, which is lost to most of us, is a valuable attribute worth seeking.

When we visited them at their caravan, everything was very clean, neat and tidy. But what really struck me was the fact everything was kept minimal and simple, although it wasn’t bare.

The homely touch of a woman was reflected in the patchwork quilted bed covers, pillows and even a quilted cover neatly fitted over the wall mounted TV screen. Undies in this cupboard, 4 pairs of Jeans in this one, some nibilies in this one, and just one board game to use to pass the time.

I’ve met people who go ‘caravaning’ and they have every nook and cranny filled to overflowing with every concievable luxury or time consuming device, product or distraction. There are heaps of shoes, clothes, bikes, board games, computers, washing machines, dryers, and a caravan filled to exploding and grossly over-weight.

But not Jack or Fay. It’s just kept simple.

And they quietly enjoy their days of retirement. Simple really.

I can’t help but wonder, is it possible to make and keep life simple again… I have a lot to learn.