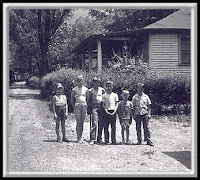 After school the neighbourhood kids swiftly gathered in the street in front of number 16. No significance to the number, it was just where we congregated as mates. Two leaders, one a winner of the last game and the other who you didn’t argue with if you valued your life, stand amongst the eager boys who waited with bated breath as the game for the arvo was determined.

A shout of approval rises up as the game is announced: “Mangoes!” A game of hide and seek. One team hides, the other seeks… And the outcome determined with ripened or rotting mangoes fallen from the trees scattered densely throughout the neighbourhood. Last one standing, unscathed, wins

The winner from the last game got to pick first.

A flurry of well known order and a row of kids eagerly await the next decision as the two leaders separate and begin the call of ‘dibs’. “I’ll take Bill.”, says one followed by the other Captain with a flick of the head to summon, “You, Gazza”, and the latest pick is added. The strongest and fastest first, followed by biggest for the ‘seek’ team and smallest for the ‘hide’… each selection based on a complex criteria to determine a winning strategy.

Standing in the crowd of eager kids. Waiting. Thinking. “Am I good enough?” “Oh God… I don’t want to be last pick… that’s for the loosers.” Waiting. Shuffling foot to foot. “Good grief, can’t you see me?!” And the teams begin to swell and the pool is getting smaller.

Anxiety sets in. Thoughts racing now, “Me, me!” and it breaks out into the words of desperation as a girl is chosen, “Pick me! Pick me!” The pool erupts, “No! Pick me!” but within moments dies down as the last few are begrudgingly chosen. Eventually their is an odd one left. “What about me?”  “Yours.” and the retort, “Nah! You can ‘ave ‘im.”

Just kids? Not really, even when we grow up, we still do it… just more sophisticated at it.

When they arrived, Samuel saw Eliab and thought, “Surely the LORD’s anointed stands here before the LORD.”  But the LORD said to Samuel, “Do not consider his appearance or his height, for I have rejected him. The LORD does not look at the things human beings look at. People look at the outward appearance, but the LORD looks at the heart.”  Then Jesse called Abinadab and had him pass in front of Samuel. But Samuel said, “The LORD has not chosen this one either.”  Jesse then had Shammah pass by, but Samuel said, “Nor has the LORD chosen this one.”  Jesse had seven of his sons pass before Samuel, but Samuel said to him, “The LORD has not chosen these.”  So he asked Jesse, “Are these all the sons you have?” “There is still the youngest,” Jesse answered. “He is tending the sheep.” Samuel said, “Send for him; we will not sit down until he arrives.”  So he sent and had him brought in. He was glowing with health and had a fine appearance and handsome features. Then the LORD said, “Rise and anoint him; this is the one.”
1 Samuel 16:6-12 (emphasis mine)

Jesus was great at picking his team. I love how he picked Peter.

And he (Andrew, Simon’s brother) brought him to Jesus. Jesus looked at him and said, “You are Simon son of John. You will be called Cephas” (which, when translated, is Peter).
John 1:42

Jesus looked at the heart and saw not what this man was on the outside… already defined “Simon, son of John”, but He saw him as Peter which means, “Rock”. What!? A rock.

Yes. And later Jesus reveals the significance of the ‘rock’.

And I tell you that you are Peter, and on this rock I will build my church, and the gates of death will not overcome it.
Matthew 16:18

We all get to choose players on our team throughout life. Be it a partner in marriage, a work colleague, a friend, mates… our team can have all sorts in it.

But do you choose them for what you can get out of them?

… or, do you choose them because you see what they can be and you can play a part in that?

Even the little runts in life, the ones glossed over, can be the best players….

I was the discarded one that no one really wanted that day. I did not fulfill the strategic selection criteria because my attributes were unseen and internal. But I had determination, a heart to win and an ability to scheme and think through my own strategy to win. I stayed on the sidelines with everyone ignoring me and going after the ‘real threats’. And when all the fastest, biggest and smartest ones were eliminated it was easy to take out the tired remaining ones. I won. I was the ‘rock’. My name was, and is, Peter. And I got to choose first the next day.

When you look at your next player… what will you see?