Mock not what you don’t understand. 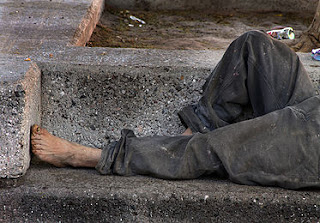 Coming out of the underground railway, Parliament Station in Melbourne, I would walk the few streets to my workplace. Every morning I passed a bus shelter commandeered by a derelict who was sleeping on a bench seat and covered in newspapers for warmth. If you entered the shelter, the smell was overwhelming. The years of grim and filth was oblivious to this homeless shell of a man.

It was easy to turn a blind eye, treat with contempt and ignore this man. Before I became a Christian, I might have even abused and kicked him out for soiling up the bus shelter – it wasn’t meant for the likes of him! I liken it to spotting doggy poo just in time, skirting around it without losing stride or making it too obvious that you nearly stepped in it, and then cursing the person responsible for the dog who left the surprise.

However one bitter wet winter’s day, I bought a hot coffee from the train station and gave it to the man. He was suspicious at first but gratefully accepted it. I began to do it regularly. No conversation needed but the grateful look said it all. After a few weeks the man began to speak… just a simple thank you at first and then little by little I began to know him, and he, me, through our daily one minute exchange.

To my shock he once was a highly successful Stock Broker with a multi-million dollar business, a flash home, married and two children. Go figure. Weakened by alcoholism, the pressure and stress broke and crushed him. On the streets, homeless, he considered he was free of the demands on his life. Life was simple and it was all he could bear.

Then he disappeared. I hoped he hadn’t died on the streets… I like to believe he recovered and was restored. I hoped I had helped.

Most of all, I am glad I met this man because it taught me to be intentional about keeping a healthy balance in life.

How easy is it to look down on others from out supposed superior position in life. I had a job and the trappings of success; he had grime, a bus shelter and a newspaper blanket. If I had not taken the time to know this man, I would be poorer for it.

Then the governor’s soldiers took Jesus into the Praetorium and gathered the whole company of soldiers around him. They stripped him and put a scarlet robe on him, and then twisted together a crown of thorns and set it on his head. They put a staff in his right hand as a scepter. Then they knelt in front of him and mocked him. “Hail, king of the Jews!” they said. They spit on him, and took the staff and struck him on the head again and again. After they had mocked him, they took off the robe and put his own clothes on him. Then they led him away to crucify him. Matthew 27:27-31

Maybe we should not mock what we don’t understand. Maybe, just maybe, we should take the time to understand before we judge.