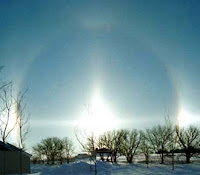 Today is the Shortest day of the year! We are mid-winter. From now on the days will grow longer and spring will be upon us swiftly!

The exact date of each solstice changes by a few days each year – this is largely a consequence of our calendar system where we count years of 365 or 366 days, but the Earth takes 365.256 days (the sidereal period) to complete one orbit of the Sun. The exact orbital and daily rotational motion of the Earth, such as the ‘wobble’ in the Earth’s axis (precession), also contributes to the changing solstice dates.

The solstices occur because the rotation axis of the Earth is tilted by an angle of 23.5 degrees from the vertical. If the Earth’s rotation was at right angles to the plane of its orbit around the Sun, there were be no solstice days and no seasons. Around 21 June, the Sun is at its most northerly declination (+23.5 degrees). This corresponds to the northern summer solstice and marks the longest day of the year for northern hemisphere observers. In contrast, this is the date of the southern winter solstice and marks the shortest day of the year for southern hemisphere observers. Six months later, the Sun is at its most southerly declination (-23.5 degrees) and the solstices are reversed in each hemisphere.

Who says we don’t have a creative God?! As if all this is just randomness…