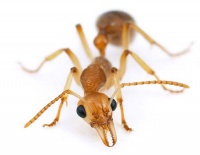 A black carpet on the tiled floor is moving. It is a sea of ants, busy with determined purpose. Each going about it’s work, nonplussed by the giant who is about to rock their little world. Their long trails pouring into the house through cracks and any gap they can find. Pffft! Doors are for humans.

Little advance raiding parties are all over the house leaving their trail as a signal to the colony to follow. Their new domain, rich in food sources.

So hard working. It was almost a shame to terminate their adventure into our home. But each invader was wiped out with spray and the remainder of the colony was encouraged to seek other avenues of exploration.

Go to the ant, you sluggard; consider its ways and be wise!
Proverbs 6:6

I couldn’t help but be amazed as I observed these ants, as unwanted as they were. Why had they invaded our home in such force? We hadn’t left any food out or had forgotten spills.

No, these ants were heading for higher ground… the food sources were simply a bonus. Their real purpose was in preparation for the rain to come. That’s right, those little ants know 3 days in advance of the coming rain. Mark my words, it is going to bucket down. And those little ants, they are preparing for it. We best do so too!

Yes, we can learn many things from God’s creatures. Everything has a purpose and was designed for a reason. We would do well to observe His Creation and in all its awesome splendor, then turn our face towards it’s Creator. For all these creatures point to the One who made them and said, “It is good.”

But His greatest creation was us! Human beings.

How He loves us. His masterpiece. In His eyes, and out of all creation, we are very good.