When important… it’s marked with a Seal. 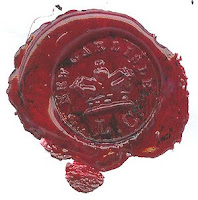 When I think of a Seal (no not the black sea creature), I picture the wax seal seen on documents.

Now days a seal can be a wax seal bearing an impressed figure, or an embossed figure in paper, with the purpose of authenticating a document. Wax seals were applied to letters and parcels to indicate whether or not the item had been opened since the seal was applied. Wax seals were used both to seal the item to prevent tampering, as well as to provide proof that the item was actually from the sender and was not a forgery. To seal a letter, for example, a letter writer would compose the letter, fold it over, pour wax over the joint formed by the top of the page of paper, and then impress a ring, metal stamp, or other device. 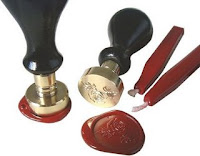 The seal we see in wax, or embossed, is actually a mould that has the mirror image of the figure in counter-relief from a device, such as mounted on rings known as signet rings (from Latin “signum” meaning sign), for making such impressions or embossments. The Seal therefore is the actual device! It’s the real thing. The wax seal, or embossing, is just a reflection of the real thing.

So important was the Seal that it would be smashed upon the owner’s death so that it could no longer be used. Even today for example, after the death of a Pope, the destruction of his signet ring is a prescribed act clearing the way for the sedevacancy and subsequent election of a new Pope. But why was this so important?

Seals were used to validate or authenticate ownership. Carriages, ships, trunks, buildings, any belongings of value were all marked with the owner’s seal. This was their property. And the imprint of their seal was the proof.

Also, it was also not uncommon for the aristocracy to walk through the markets and indicate what items they were prepared to buy. They would mark the item with their seal. Marking the item it was known as “depositing the Seal” or as we know it today, leaving a “deposit”. The item was to be held in safekeeping and in trust that upon delivery, the final payment would be guaranteed. The item was declared sold. No one else had a right to that item. No one else could buy or take that item. It was considered as “paid in full” by the owner of the Seal.

And you also were included in Christ when you heard the word of truth, the gospel of your salvation. When you believed, you were marked in him with a seal, the promised Holy Spirit, who is a deposit guaranteeing our inheritance until the redemption of those who are God’s possession—to the praise of his glory.
Ephesians 1:13,14

The Holy Spirit is the Seal. A deposit to guarantee our inheritance – eternal life with God Himself. Purchased by the blood of Christ, His Son. Paid in full. And God’s Seal, the Holy Spirit, makes it clear to everyone that we are now His, and His alone.

For he chose us in him before the creation of the world to be holy and blameless in his sight. In love he predestined us for adoption to sonship through Jesus Christ, in accordance with his pleasure and will…
Ephesians 1:4,5

I don’t know about you, but I am amazed that the Creator of the Universe chose me and adopted me into His family as a son, to be a co-heir with His Son, Jesus Christ. I am delighted to belong to Him…for ever.

That sealed it for me! 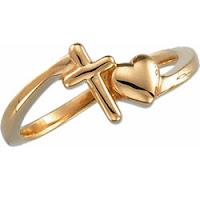