Are you sure? Are you really, really sure? 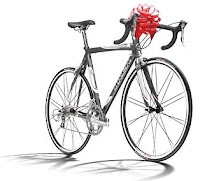 Christmas Day… all the waiting, all the anxiety approaching Christmas, all the dropped hints, pictures on the fridge, letters to Santa, and speaking about what I would be able to do with a new bike. I could ride to school and over to my friends place. Yes, having a new bike was such an exciting a prospect.

Bang! Crack of dawn, up I shoot and rush about looking for my new bike. I found heaps of other gifts to wade through… but none were my bike. As I began to run out of steam it began to dawn on me that the bike was not going to be a reality. By breakfast time I was downcast.

My Dad asked me why so gloomy…it was Christmas. I couldn’t pluck up the courage to tell him I was so disappointed that I hadn’t got a bike. He knew… I had dropped all those hints so well. I couldn’t believe they had forgotten me.

After breakfast, Dad asked me to take all the torn and discarded wrapping paper out to the incinerator behind the back shed. Yep, you guessed it. There was the most beautiful brand new shiny bike in the whole world. And right behind me was my Dad who said, “Did you really think we would forget you! You believed you were getting a bike, and you have. The best comes to those who wait.”

My Dad was right.

This kinda happened to poor old doubting Thomas, who was one of the twelve disciples. He wasn’t at the meeting when Jesus first appeared to the disciples.

On the evening of that first day of the week, when the disciples were together, with the doors locked for fear of the Jews, Jesus came and stood among them and said, “Peace be with you!” After he said this, he showed them his hands and side. The disciples were overjoyed when they saw the Lord.
John 20:19,20

All the disciples saw Jesus’ hands and side… but Thomas didn’t. He had missed out!

So the other disciples told him, “We have seen the Lord!” But he said to them, “Unless I see the nail marks in his hands and put my finger where the nails were, and put my hand into his side, I will not believe it.” John 20:25

A week later his disciples were in the house again, and Thomas was with them. Though the doors were locked, Jesus came and stood among them and said, “Peace be with you!” Then he said to Thomas, “Put your finger here; see my hands. Reach out your hand and put it into my side. Stop doubting and believe.” Thomas said to him, “My Lord and my God!” Then Jesus told him, “Because you have seen me, you have believed; blessed are those who have not seen and yet have believed.” John 20:26-29

Blessed are you who have not seen and yet believe!