All hands on deck!

Imagine an Aircraft Carrier at full steam, plowing through the sea, determined in it’s mission and to arrive at it’s destiny. 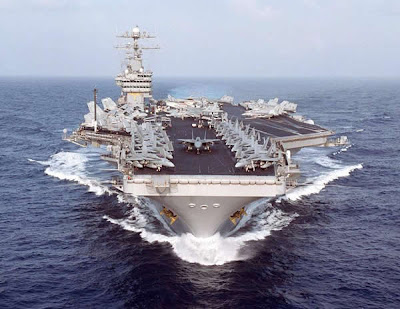 Key personnel involved in the flight deck include the Shooters, the Handler, and the Air Boss. Shooters are naval aviators or Naval Flight Officers and are responsible for launching aircraft. The Handler works just inside the island from the flight deck and is responsible for the movement of aircraft before launching and after landing. The Air Boss (usually a commander) occupies the top bridge (Primary Flight Control, also called “primary” or “the tower”) and has the overall responsibility for controlling takeoffs, landings, “those aircraft in the air near the ship, and the movement of planes on the flight deck, which itself resembles a well-choreographed ballet”. The captain of the ship spends most of his time one level below Primary on the Navigation Bridge. Below this is the Flag Bridge, designated for the embarked admiral and his staff.

Take the U.S.S. Nimitz with a complement consisting of the Ship’s Company of 3,200 and an Air-wing of 2,480, all on board beavering away, each to their own duties. This ship is going places. It’s motto was: “Teamwork, a Tradition“.

This ship can’t go anywhere or be successful in it’s missions if it were not for their teamwork. The crew must be in unity to succeed.

Did this mean that some did not agree or disliked some of the duties they had to perform. Sure. But for the sake of the whole, they were performed. Everyone had a role. Every role was important to the mission.

In battle situations, crew members maybe called upon to do far more than expected or outside of their role or to fill a gap…this is usually in response to the call, “All hands on deck!”.

Even with redundancy and backups, everyone on board was important to the smooth sailing of this ship.

As Christians, Jesus prayed that we would be in unity in our mission here on earth:

“My prayer is not for them alone. I pray also for those who will believe in me through their message, that all of them may be one, Father, just as you are in me and I am in you. May they also be in us so that the world may believe that you have sent me. John 17:20,21

Does this mean that some do not agree with or disliked some of the duties they have to perform. Sure. But for the sake of the whole, they are performed. Everyone has a role. Every role is important so that our mission is completed here on earth.

Are you on board? What is your role? Are you performing it to the best of your ability?